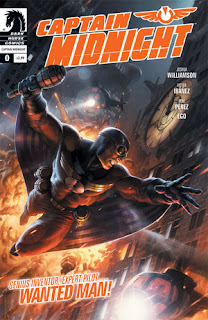 Captain Midnight, comic book series published by Dark Horse Comics, featuring the Captain returning in the 21st century after being trapped in the Bermuda Triangle during World War II. He has not aged since then. This version of the Captain is based on the Fawcett Comics series. The Captain Midnight radio show began in 1938 and ended in 1949. Therefore, the radio version of the Captain, which is the version that is in the CU, was still active after the war. Furthermore, Stephen A. Kallis, Jr.’s story “Any You Walk Away From” has the Captain active in 1971. This series is part of Dark Horse’s Project: Black Sky imprint, which also includes the series Blackout, Brain Boy, Ghost, The Occultist, Skyman, and X, all of which are set in the same universe as Captain Midnight.