I will be at FarmerCon/Pulpfest from Thursday-Sunday, signing and selling copies of both volumes of Crossovers Expanded alongside Win at the Meteor House booth. I won't be posting here in the meantime, but I will give everyone a convention report when I get back. After that, with the books finally out, I may go in a somewhat different direction with the blog, but that's all I'm gonna say about that for now. :)
Posted by Sean Levin at 3:48 PM 4 comments: 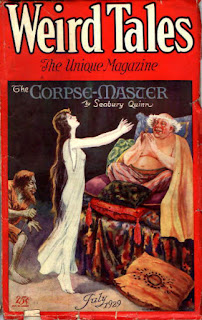 This story story by Henry S. Whitehead mentions Saul Macartney and Camilia Lanigan, who are from Whitehead's Gerald Canevin story "West India Lights." I have discussed other crossovers in Whitehead's works here in the past.

Posted by Sean Levin at 3:13 PM No comments: 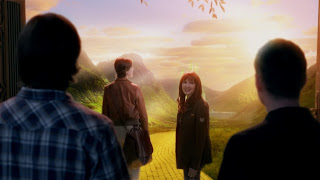 Are you a fan of L. Frank Baum's Oz books?

Then you'll love this episode of Supernatural featuring one of several different versions of Oz that CU characters have visited!

For more information, please read my books Crossovers Expanded Vols. 1 and 2. These books, which will debut at the Meteor House booth at FarmerCon/PulpFest in Columbus, OH on July 21-24, are AUTHORIZED companions to Crossovers: A Secret Chronology of the World Vols. 1 and 2 by Win Scott Eckert. Win provided the foreword to Vol. 1, and he and I will be at the convention signing copies, as will William Patrick Maynard, author of the foreword for Vol. 2, and Keith Howell, cover artist for both volumes.
Posted by Sean Levin at 3:13 PM No comments:


October 1885
THE HOUND OF THE D’URBERVILLES
Professor Moriarty and Colonel Moran are hired by Jasper Stoke-d‘Urberville, nephew of Simon Stoke-d’Urberville, to kill Red Shuck, the spectral hound that has allegedly haunted the d’Urberville family for generations. Appearing or mentioned are: the village of Trantridge; the Chase; Simon’s son Alexander; Theresa “Tess” Durbeyfield-Clare; Tess’ son Sorrow and siblings Abraham and Modesty; the city of Wintoncester; Selden; Desperado Dan’l; a terrifying Fat Man in Whitehall; Doctor Jack Quartz; Dr. Nikola; the Si-Fan; the Lord of Strange Deaths; the Grand Vampire; Les Vampires; Wessex; Diggory Venn; Parson Tringham; Car Darch; Sir Pagan d’Urberville; Melchester; Lord John Roxton; Casterbridge; the Ranee of Ranchipur; Blind Herder; Arnsworth Castle; Jim Lassiter; John Durbeyfield; the parish of Kingsbere; Sherton Abbas; Singapore Charlie; Marlott Churchyard; and Elizabeth-Louise Durbeyfield.
Short story by Colonel Sebastian Moran, edited by Kim Newman in Professor Moriarty: The Hound of the d’Urbervilles, Titan Books, 2011. The village of Trantridge, Simon Stoke-d’Urberville, the Chase, Simon’s son Alexander, Theresa “Tess” Durbeyfield-Clare, Sorrow Durbeyfield, Abraham Durbeyfield, Modesty Durbeyfield, the city of Wintoncester, Parson Tringham, Car Darch, Sir Pagan d’Urberville, John Durbeyfield, the parish of Kingsbere, Marlott Churchyard, and Elizabeth-Louise (or Eliza-Louisa) Durbeyfield are from Thomas Hardy’s novel Tess of the d’Urbervilles. Diggory Venn is from Hardy’s novel The Return of the Native. Wessex is a fictional region of England that appears in most of Hardy’s novels. Melchester is from Hardy’s Two on a Tower and Jude the Obscure. Casterbridge is from Hardy’s The Mayor of Casterbridge. Sherton Abbas is from Hardy’s The Woodlanders. Selden is from Doyle and Watson’s The Hound of the Baskervilles. The terrifying Fat Man in Whitehall is Mycroft Holmes, Sherlock’s brother. Blind Herder is the blind mechanic Von Herder from the Holmes story “The Adventure of the Empty House.” “The Arnsworth Castle business” is an untold Holmes case mentioned in “A Scandal in Bohemia.” Desperado Dan’l is inspired by (though not the same person as) the British comic book cowboy Desperate Dan. Doctor Jack Quartz is the arch nemesis of dime novel detective Nick Carter. Dr. Nikola is from the series of novels by Guy Boothby. The Si-Fan and Singapore Charlie are from the Fu Manchu novels by Sax Rohmer; the Lord of Strange Deaths is Fu Manchu himself. Les Vampires are from the titular film serial directed by Louis Feuillade, as is their leader, the Grand Vampire. Lord John Roxton is from Doyle’s Professor Challenger stories. Ranchipur is from the film The Rains of Ranchipur. Jim Lassiter is from the novel Riders of the Purple Sage by Zane Grey. The month is given, but the year is conjecture based on the facts Moran has worked for Moriarty for some time and Selden is next seen as an escaped convict in 1888.
Posted by Sean Levin at 7:46 AM No comments: 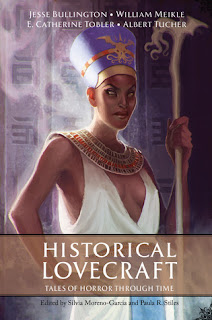 This anthology contains the story "The Second Theft of Alhazred's Manuscript" by Bradley H. Sinor. In it, Sir James Marsden, a member of a group dedicated to combating occult forces, hires Sherlock Holmes and Dr. Watson to investigate the theft of a portion of Abdul Alhazred’s manuscript the Al-Azif, aka the Necronomicon. This story takes place two months after “The Adventure of the Empty House,” that is, in June 1894.

Posted by Sean Levin at 6:58 AM No comments: