Summer 1935-1936
DAY OF THE DESTROYERS
Jimmie Flint, Secret Agent X-11 of the Intelligence Service Command, battles Colonel Lucian Starliss and his Medusa Council, who seek to oust President Franklin Delano Roosevelt and take over the United States. Along the way, he receives aid from the Phantom Detective (Richard Curtis Van Loan), the Black Bat (Tony Quinn), the Green Lama (Jethro Dumont), and the Gray Face (Owen Tull.) Herald-Tribune reporter Luke Jaconetti moonlights for the Amalgamated Press, which employs Jimmie’s girlfriend Kara Eastland. Luke receives a phone call from Betty Dale. After the Council is defeated, Kara says that Dumont is organizing other wealthy men such as himself, including Van Loan and “that odd chap, Wentworth” for a Patriots for Progress group.
An anthology of linked stories by Gary Phillips, Tommy Hancock, Aaron Shaps, Jeri Westerson, Ron Fortier, Eric Fein, Joe Gentile, Paul Bishop, and Adam Lance Garcia, edited by Gary Phillips, Moonstone Books, 2015. Luke Jaconetti first appeared in Garcia’s story “The Black Rock Conspiracy,” featuring Lester Dent’s pulp hero Foster Fade; he also appeared in Garcia’s novel The Green Lama: Scions. Reporter Betty Dale is the girlfriend of Secret Agent X, who has no known connection to Secret Agent X-11. “That odd chap, Wentworth” is Richard Wentworth, aka the Spider. This crossover brings Secret Agent X-11 (a character created for this anthology) and the Gray Face (another original character, created by Phillips), into the CU.
Posted by Sean Levin at 8:16 AM 3 comments:

Crossover Cover: In the Court of the Yellow King 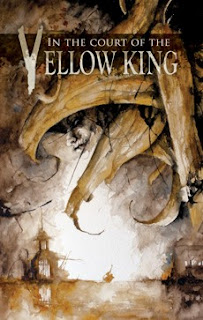 This anthology of stories based on Robert W. Chambers' The King in Yellow has two crossover stories. In William Meikle's "Bedlam in Yellow," Carnacki investigates strange happenings at Bethlem Asylum involving an inmate who read the titular play from Chambers' book, and finds himself transported to Carcosa, where he encounters the King in Yellow himself. In Pete Rawlik's "The Sepia Prints," a member of the security force for the American delegation to the Treaty of Versailles is on leave after an incident involving a strange estate on the outskirts of Paris and a disreputable doctor who, like him, is from Arkham. A woman gives the unnamed man a collection of photographs from the Paris Opera House’s 1899 production of The King in Yellow before committing suicide. Rumors about the opera being haunted came to a head in the early 1880s with the strange affair of the Opera Ghost. The man meets Moncharmin, the Opera’s librarian, who appeared in the play. The story’s unnamed narrator is Robert Peaslee from H.P. Lovecraft’s "The Shadow Out of Time." The disreputable doctor is Martial Canterel, the owner of the titular estate in Raymond Roussel’s novel Locus Solus. Peaslee encountered Canterel in Rawlik’s story "Revenge of the Reanimator." Arkham, Massachusetts is the setting of a number of Lovecraft’s Cthulhu Mythos stories. The Opera Ghost and Moncharmin are from Gaston Leroux’s novel The Phantom of the Opera.

Posted by Sean Levin at 9:30 AM No comments:

Crossover Cover: Dillon and the Voice of Odin 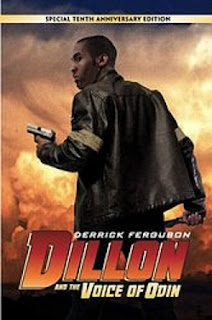 Dillon battles the evil Odin, who is using a sonic device to menace the world. Dillon, whose catamaran is called the Copperfin, drinks a can of Tenku Beer. Double-O agents are mentioned in a flashback, and British Secret Service agent Gregory Tipp has an office on the tenth floor of the Transworld Consortium building, which is an elaborate front for the Service itself. At the headquarters of Odin’s ally Dr. Numby, Dillon admires swords handcrafted by Domingo Montoya, one of the greatest swordcrafters who ever lived. The president of the United States meets with Doctor Michael Cadwallander, Director of Special Projects for the Henderson Institute of Alternative Technologies, and Milo Dane, head of the Omega Elite, the U.S. government’s ultimate “dirty tricks” department. Dillon’s friend Eli Creed drinks Old Dusseldorf beer. Dillon’s catamaran is named after the U.S.S. Copperfin submarine seen in the film Destination Tokyo. Tenku Beer is from the film Kill Bill: Vol. 1. Double-O agents and Transworld Consortium are from Ian Fleming’s James Bond novels. Domingo Montoya is the father of Inigo Montoya, one of the main characters of William Goldman’s novel The Princess Bride. The Henderson Institute of Alternative Technologies is run by Dr. Sylvester Henderson, whose brother Mongrel has appeared in stories by Ferguson for Airship 27 Productions’ Mystery Men (& Women) anthology series. Omega Elite has been mentioned in several of Ferguson’s stories. Old Dusseldorf beer is from the television series Magnum, P.I.