Hey, all. I know I haven't posted anything since Thursday. I was at FarmerCon/Pulpfest, and having a blast with my buddies. Today marks my triumphant return. First of all, before I give you my belated Crossover of the Week post, I wanted to share this picture of me and my dear friend, co-publisher, and predecessor as custodian of the Crossover Universe, Win Scott Eckert (I'm on the left): 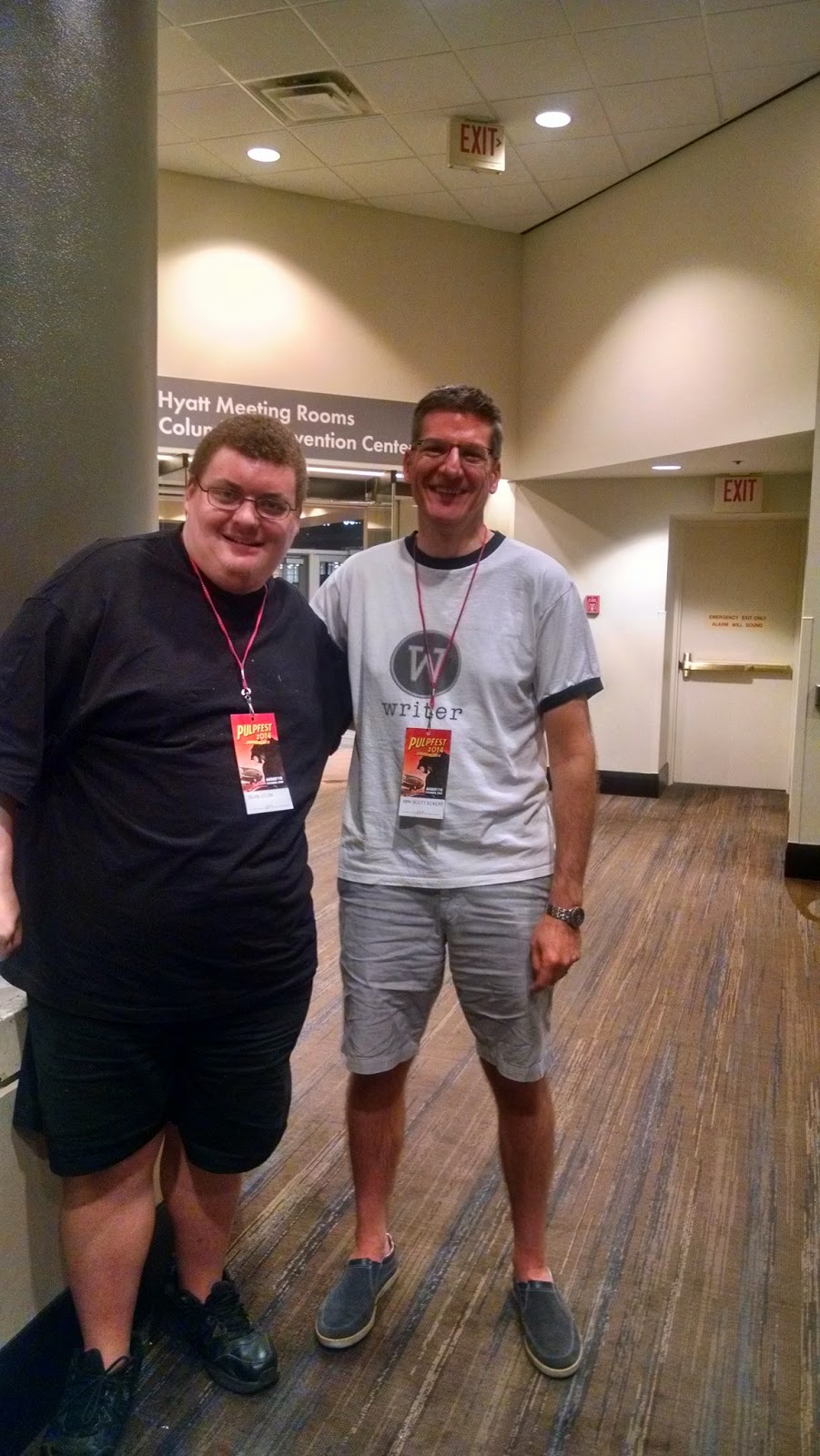 THE HUNTERS OF MARS
Leo Saint-Clair (aka the Nyctalope) takes a transport to the Martian city of Helium, where his assistance has been requested by John Carter, Warlord of Mars (aka Barsoom.) Carter managed to convince two other Martian races, the Sorns and the Hither People, to join forces with his to drive the invading Cephales from Mars. The Cephales fled to Earth, where they crushed England’s armies before falling prey to the planet’s bacteria. The surviving members of the colony returned to Mars, where Leo and Oxus prevented them from attacking the newly-created French colony. After the Cephales’ defeat, the duo learned of other races on the Red Planet such as the Tharks and the Red Men of Helium. Oxus believes that the radium used by the people of Helium might be able to revive an ancient capsule he has discovered in one of the nearby Martian ruins, which apparently contains secrets that could advance the cause of space travel by light years, and end the Great War within a few months. Leo meets with a group consisting of the Thark Tars Tarkas, Carter, and the latter’s wife, Dejah Thoris, Princess of Helium. Reports are mentioned of a warrior resembling Carter in ancient Phoenicia, as well as a 13th century “Outlaw of Torn.” Carter wishes Leo to investigate the mutilations of several Tharks. Kantos Kan and other Martians gather around the bodies of two murdered palace guards. Leo tells Carter that the killer does not operate under the ethical codes of the Tharks, the Sorns, the Hross, the Hither People, or any other known race on Barsoom. He theorizes that the killer is a hunter from another world collecting trophies. Leo is well versed in the hunting techniques of Quatermain and Roxton. The hunter, or Predator, is blown up by a device in its gauntlet after being killed, destroying a Thark incubation chamber in the process. Carter says that he will take the sole surviving infant to Sola, who will care for him.
Short story by Matthew Dennion in The Nyctalope Steps In, Jean-Marc and Randy Lofficier, eds., Black Coat Press, 2011; reprinted in French in Les Compagnons de l’Ombre (Tome 8), Jean-Marc and Randy Lofficier, eds., Rivière Blanche, 2011. The Nyctalope, and Oxus appear in French pulp novels by Jean de La Hire. Helium, John Carter, Barsoom, the Tharks, the Red Men, Tars Tarkas, Deja Thoris, Kantos Kan, and Sola are from Edgar Rice Burroughs’ Mars novels. The Sorns and the Hross are from C.S. Lewis’ Out of the Silent Planet. The Hither People are from Edwin Arnold’s Lieutenant Gullivar Jones: His Vacation. The Cephales (or Kephales) are from de La Hire’s The Great Adventures of a Scout; here, they are conflated with the Martians from H.G. Wells’ The War of the Worlds. George Alec Effinger’s story “Mars: The Home Front” proposed that Wells’ Martians (aka the Sarmaks) came from Barsoom, while The League of Extraordinary Gentlemen, Volume II depicted John Carter’s alliance with the Sorns and the Hither People to drive off Wells’ Martians. The Nyctalope and Oxus encountered Wells’ Martians in de La Hire’s The Nyctalope on Mars. The capsule is from the British television serial Quatermass and the Pit. The Phoenician warrior is the title character of another Edwin Arnold novel, Phra the Phoenician, whom Dennis E. Power and Dr. Peter Coogan conflated with John Carter in their essay “John Carter: Torn from Phoenician Dreams (An Examination Into the Theories that John Carter was Phra the Phoenician and Norman of Torn)” (Myths for the Modern Age: Philip José Farmer’s Wold Newton Universe, Win Scott Eckert, ed., MonkeyBrain Books, 2005.) The Outlaw of Torn is from the novel of the same name by Burroughs; Philip José Farmer conflated him with John Carter in his speech “The Arms of Tarzan,” also reprinted in Myths for the Modern Age. Quatermain is H. Rider Haggard’s Allan Quatermain, while Roxton is Lord John Roxton from Arthur Conan Doyle’s Professor Challenger tales. The Predator race is featured in a series of science fiction films. The Predators have appeared in several crossover tales in comic books; however, only those crossovers involving Crossover Universe mainstays such as Tarzan or Mycroft Holmes are incorporated into CU continuity.
Posted by Sean Levin at 10:21 AM