Crossover Cover: The Hulk Meets the Hunchback of Notre Dame 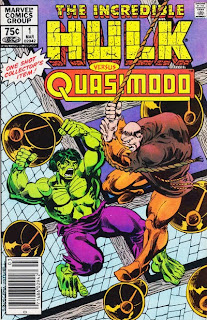 This comic is adapted from "When Monsters Meet," an episode of the 1980s Incredible Hulk cartoon. Dr. Bruce Banner and Betty Ross are in Paris to meet with the Academy of Science. Betty is carrying a key that opens an underground gold vault. The namesake and great-great-great-great-great-grandson of Quasimodo kidnaps Betty, hoping both to plunder the vault and to have one of the assembled scientists mutate him into a “normal” human form. Bruce has been given a formula by one of his colleagues that could cure him of his double life as the Hulk, but winds up losing it, and it falls into the hands of Quasimodo. However, the formula seemingly lacks efficacy, and Banner turns into the Hulk and does battle with the hunchback. However, Quasimodo is finally cured of his deformities, and he and the Hulk make peace.