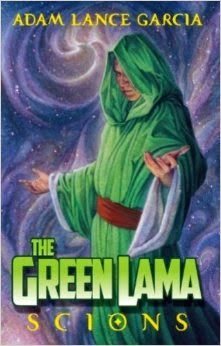 The Green Lama investigates a cruise ship that has crashed on Liberty Island, all but one of those aboard having killed themselves. Two gangsters that work for Pete Barry witness the crash while disposing of a body. The Lama’s ally Police Lieutenant John Caraway captures crime lord Tzu-hao Ming-yu, who claims to be “the son of Doctor Fu—” Caraway first read about the Lama in the gossip section of the Sentinel. The Lama, in his civilian identity of millionaire Jethro Dumont, is interviewed by Betty Dale of the Herald-Tribune. One of Betty’s coworkers is crime reporter Luke Jaconetti. The Lama’s agents Gary Brown and Evangl Stewart-Brown have a small farm outside Black Rock. Commissioner Woods refers to the Tipton Murders. The crew and passengers of the ship were possessed by the Old Ones. Betty remarks that now she knows how Din feels over at the Planet. Falsely suspecting Frankie Annor, Jr. of being a disguised vigilante, Betty remarks, “Next thing you’re going to tell me is you prefer to be called a letter or some kind of arachnid.”  The Green Lama appeared in stories by “Richard Foster” (Kendell Foster Crossen) in the pulp Double Detective. Pete Barry is from Garcia’s story “Dead Men’s Guns,” in which the Tipton Murders occurred. The town of Black Rock and Luke Jaconetti are from another story by Garcia, “The Black Rock Conspiracy.” Both of the aforementioned stories appeared in the anthology The New Adventures of Foster Fade, the Crime Spectacularist, featuring new stories of Lester Dent’s pulp hero, and both had cameos by an unnamed Caraway. Black Rock is also the setting of Garcia and Heidi Black's graphic novel Sons of Fire. Dinamenta “Din” Stevens is Fade’s ghostwriter for The New York Planet newspaper. “Doctor Fu—” is Sax Rohmer’s criminal mastermind Doctor Fu Manchu. The Sentinel is the New York branch of the newspaper published by Britt Reid, aka the Green Hornet. Reporter Betty Dale is the girlfriend of Paul Chadwick’s pulp hero Secret Agent X. The Old Ones (also known as the Great Old Ones) are the malevolent alien beings worshipped as gods in H.P. Lovecraft’s Cthulhu Mythos. Betty is suggesting that Frankie could be either Secret Agent X or the Spider.