Crossover Cover: Return of the Dugpa 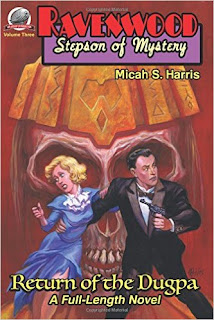 Ravenwood battles the Dweller on the Threshold, the former chief agent of the benevolent White Lodge, now an inhabitant of the Black Lodge, served by a group called the dugpas. Ravenwood is aided in his battle with the Dweller by a shadowy figure called the Dark Eminence. Actress Anne D’Arromanches grew up in an orphanage in the Midwest, where she was placed by her mother, who only spoke French. Ravenwood, “the stepson of mystery,” appeared in stories by Frederick C. Davis in the pulp magazine Secret Agent X. The Dweller on the Threshold is from Edward Bulwer-Lytton’s novel Zanoni. The White Lodge, the Black Lodge, and the dugpas are from Talbot Mundy’s novel The Devil’s Guard. David Lynch and Mark Frost utilized the Dweller, the Lodges, and the dugpas in their television series Twin Peaks. The Dark Eminence is the Shadow. Anne D’Arromanches is meant to be Ann Darrow from the classic film King Kong. Harris reveals the Shadow planted the idea into director Carl Denham’s mind to ask Ann to star in his film shot on Skull Island. In his book The Eldritch New Adventures of Becky Sharp, Harris identified Ann as the daughter of Lord Eugenides (a Tarzan analogue) and Becky, a character from William Makepeace Thackeray’s Vanity Fair. The chronology of Lord Eugenides’ exploits does not fit with the timeline of the Tarzan novels, which combined with other conflicts with the established CU history of characters such as Captain Nemo and Irene Adler places The Eldritch New Adventures of Becky Sharp in an alternate universe. The Ann Darrow/Anne D’Arromanches of the CU is probably Becky Sharp’s daughter by John Gribardsun, the time-traveling future Tarzan seen in Time’s Last Gift.