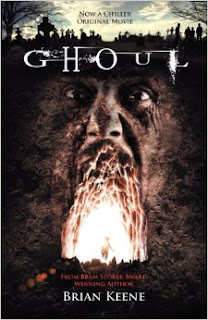 Young Timmy Graco and his friends find themselves battling a carnivorous ghoul in rural Pennsylvania. The boys are also troubled by the Sawyers’ dog Catcher. The LeHorn family is among the mourners at Timmy’s grandfather’s funeral. The Ghoul knows of the Thirteen, including Behemoth and the Great Wurms, as well as the Siqqusim. It is also familiar with the “ancient race of subterranean swine-things.” The Daemonolateria is mentioned. In Keene’s novel Terminal, Tommy O’Brien also mentions having been attacked by Catcher during his youth. The LeHorn family is from Keene’s novel Dark Hollow; this appearance takes place less than a year before the tragic events that befell them in the flashback portions of that novel. The Thirteen are the main villains of Keene’s mythos, thirteen ancient creatures who survived the destruction of the previous reality by God and now seek the destruction of the current reality, traveling from universe to universe bringing death and destruction; Behemoth and the Great Wurms can be seen in Keene’s Earthworm Gods novels, and the Siqqusim are the main villains of his The Rising series. The subterranean swine-things are from William Hope Hodgson’s novel The House on the Borderland. The Daemonolateria is a fictional book of magic that appears in a number of Keene’s works, including “Caught in a Mosh,” Dark Hollow, and Ghost Walk.