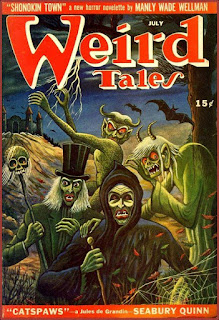 The July 1946 issue of Weird Tales contains the story "Shonokin Town" by Manly Wade Wellman. John Thunstone wishes the late Lovecraft, who “knew so much about the legend of Other-People, from before human times, and how their behaviors and speech had trickled a little into the ken of the civilization known to the wakeaday world,” and de Grandin could see and hear the Shonokins. The H. P. Lovecraft reference implies John Thunstone exists in the same universe as Lovecraft’s Cthulhu Mythos. Jules de Grandin is an occult investigator created by Seabury Quinn.