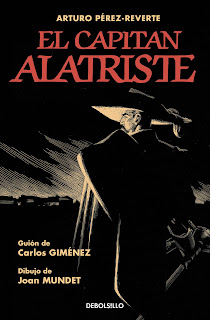 In March 1623, Spanish swordsman for hire Captain Diego Alatriste is paid to kill two men, but ultimately refuses to do so. The men turn out to be the visiting Prince of Wales and Marquis of Buckingham. The narrator, Íñigo Balboa, Alatriste’s squire, telling the reader of Buckingham’s outrageous behavior, says he “would get his comeuppance in his own country, when some years later a Puritan lieutenant named Felton – upholding, they say, the honor of a certain Milady de Winter – gave him what he deserved; more stabs in the gut than a missal has prayers.” The reference to Milady de Winter establishes that the Alatriste books take place in the same universe as Alexandre Dumas’ The Three Musketeers.