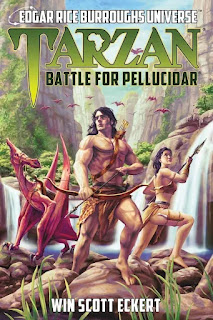 Are you a fan of the works of Edgar Rice Burroughs?

Then you'll love this novel by the creator of the Crossover Universe, Win Scott Eckert! An official Edgar Rice Burroughs Universe novel published by ERB, Inc., it pits Tarzan against Nazis in Pellucidar. Many other Burroughs works are referenced, as well as a few other authorized pastiches that have been integrated into the ERB Universe and some original stories of Burroughs' characters in other media, such as comic strips and animation.

All the details can be found in my book Crossovers Expanded Vol. 3, coming from Meteor House ASAP!