Crossover Covers: The Many Faces of Arsène Lupin 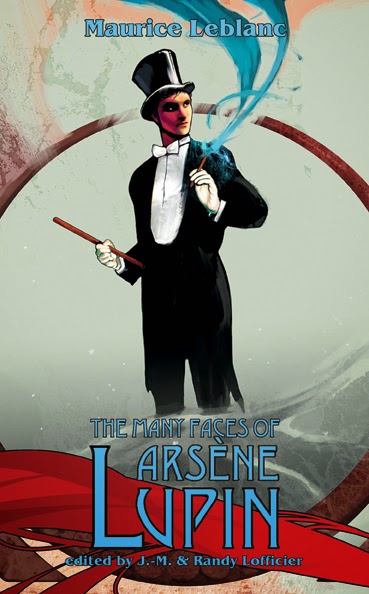 This anthology from Black Coat Press contains a number of stories featuring Maurice Leblanc's gentleman thief Arsène Lupin, mostly pastiches but also including a short story by Leblanc and a play co-written by him and Francois de Crosset. There are a number of vintage pastiches included, such as Anthony Boucher's "Arsène Lupin vs. Colonel Linnaus," which has a Sherlock Holmes reference, and therefore I have included it in the new volumes. Twelve stories are reprinted from previous Black Coat anthologies, all of which Win included in the first two volumes. Four new stories are also included, all of which will also be in the new volumes: Bradley H. Sinor's "With Cat-Like Tread," Matthew Dennion's "The Price of a Favor," "A Theft of China" by Matthew Ilseman (a follower of this site), and David L. Vineyard's "The Last Jest of Arsène Lupin" (which I treated as an alternate universe story, since it portrays Lupin as Nero Wolfe's father, whereas in the CU Wolfe's father is Sherlock Holmes.)
Posted by Sean Levin at 9:16 AM