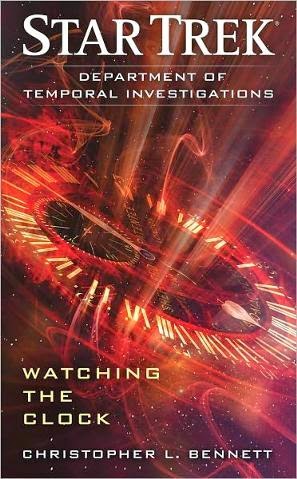 This Star Trek tie-in novel features Agents Lucsly and Dulmur of the Department of Temporal Investigations from Deep Space 9. At one point, Lucsly refers to previous temporal causality loops, including the Tigellan chronic hysteresis of Stardate 8009. The Tigellan chronic hysteresis is a reference to the Doctor Who serial "Meglos." Although most of the Doctor's exploits take place in an alternate reality to the Crossover Universe, it has been established that he does have a CU counterpart, who sometimes goes by the name Doctor Omega. The time travel devices in a Federation storehouse include large, blue boxlike artifact and an ornate ancient time carriage with a large disk at its rear. The boxlike artifact is the Doctor's TARDIS, while the ancient time carriage is from H.G. Wells' The Time Machine, with this description being based on George Pal's 1960 film. Cyral Nine says that agents of the Aegis such as herself "stop meddlers from tampering with history. We're not just out for general do-gooding like those damn androids." "Those damn androids" are from the TV movie The Questor Tapes, which was developed by Star Trek's creator Gene Roddenberry. Finally, the Aegis homeworld is described as having silver trees and an orange sky, which matches the description of Gallifrey, the Doctor's home planet. Either the Aegis' homeworld is the Gallifrey of the CU, or the two worlds are somehow connected.