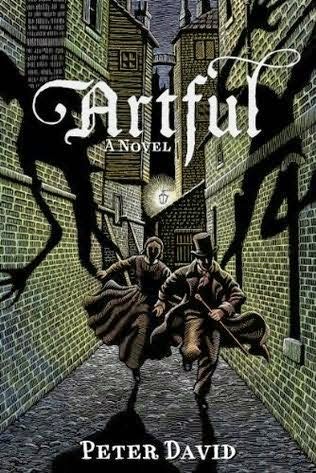 The Artful Dodger and young Abraham “Bram” Van Helsing struggle against vampires seeking to rule England. The Baker Street Irregulars also appear, and it is stated that their leader is always called Wiggins. Apparently the concept of the Irregulars predates Sherlock Holmes’ involvement with them. In the preface, A Christmas Carol is described as a biographical study. David, explaining how the Dodger avoided being shipped off to Australia, writes “By now, you are doubtless becoming impatient in wondering just how it was that the Artful was walking the streets of London rather than striding the deck of a ship bound for the land of Oz (an excursion not to be confused with his later unexpected journey to the Land of Oz, an astoundingly unlikely sequence of events that will remain unexplored for the duration of this history.”) The portrayal of Fagin as a vampire, and the revelation in the novel’s final sentence that he will later become Jack the Ripper, place this novel outside CU continuity.
Posted by Sean Levin at 11:52 AM