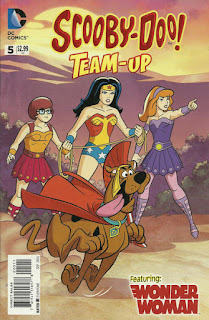 Velma and Daphne are invited to Paradise Island by Wonder Woman on Batman’s recommendation, partly to learn the ways of the Amazons, and partly to help them stop the spate of mythological creatures that have been attacking recently. This is somewhat complicated by Fred, Scooby, and Shaggy being unable to set foot on the mainland due to the Olympian gods’ edict. Since the Amazons are canonically immortal, and other stories set in the CU have Wonder Woman active in the 1970s and early '80s, there is no problem with including this story, even though Diana was first active in the 1940s.