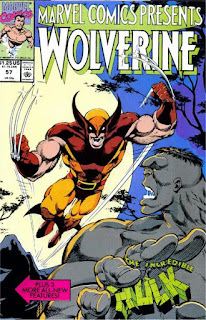 In one of the stories in this anthology comic, the Black Cat steals an alleged treasure map leading to the Crown Jewels of France for antiquarian Hervé Marat, who calls the Kingpin to tell him the Cat is about to fall into a police trap. However, the female thief manages to escape the gendarmes. Inspector Gorlier is nevertheless glad they have recovered the fake map they planted, since it can be used as evidence, and they have outwitted the Cat. One of the gendarmes serving under Gorlier, Henri Poirot, is pleased to have an entertaining story to tell his great-uncle. Henri’s great-uncle is, of course, Hercule Poirot. Julian Symons has placed Hercule’s birth in 1864, which would make him 125-years-old at the time of this story; however, Rick Lai’s essay “Partners in Crime: Fu Manchu and Carl Peterson” (Rick Lai’s Secret Histories: Criminal Masterminds, Altus Press, 2009) provides a possible explanation for the Belgian sleuth’s longevity. Both the Black Cat and the Kingpin have independent links bringing them into the CU.