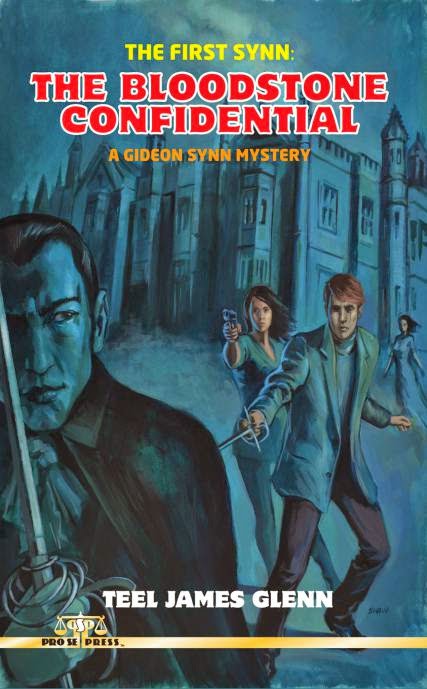 Major Gideon Synn attempts to end an alleged curse on the Bloodstone family, having failed in that task seven years ago. Synn recommends to his comrades that they call Ham Brooks, since they will need a lawyer to clear them of any possible murder charges regarding the ninjas they just battled, who have committed suicide. An article about the battle by Moxie Donovan appears in the Daily Star. Synn often takes over teaching the martial art Sulsa Do to students at the Shadows Foundation building when his friend and teacher Anton Chadeaux is away. Synn once explained the Sulsa Do secret of self-concealment to his acquaintance Lamont Cranston, who seemed to understand what he was saying. Synn’s sister Kathy recounts to him a dirty joke she heard from Monk Mayfair. Synn tells Kathy that they’ll have to lay a network of the black light/body heat sensors that Long Tom designed for him around the Bloodstone mansion. Ham, Monk, and Long Tom Roberts are three of Doc Savage's five aides. Moxie Donovan and Anton Chadeaux (aka Dr. Shadows) are two of Teel James Glenn's other series characters. Lamont Cranston in this instance is probably the Shadow posing as the real Cranston.