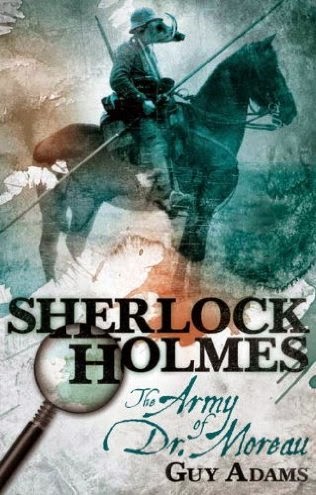 A sequel to Adams' Sherlock Holmes: The Breath of God (which I covered in an earlier post, and classified as an AU) in which Holmes and Watson do battle against creatures created by, apparently, the still-living Doctor Moreau (from H.G. Wells’ The Island of Doctor Moreau.) Also appearing are Professor Challenger (from Doyle’s The Lost World and other stories), Professor Cavor (from Wells’ The First Men in the Moon), Abner Perry (from Edgar Rice Burroughs’ Pellucidar novels), Professor Otto Lidenbrock (from Jules Verne’s Journey to the Center of the Earth, referred to here as Oliver Lindenbrook, the name used in the 1959 film version of Verne’s novel), Roger Carruthers (from Adams’ novels The World House and Restoration) and Norman Greenhough (from the film Without a Clue, a comedy in which Dr. Watson hires an actor to play the part of his fictional detective, Sherlock Holmes.)
Posted by Sean Levin at 7:46 AM