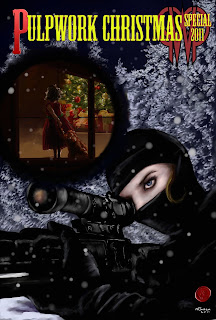 Then you'll love this story by Josh Reynolds featuring Carnacki's former apprentice and successor as Royal Occultist, Charles St. Cyprian, that also has crossover ties to the Jeeves and Wooster series, among others!

All the details can be found in Crossovers Expanded Vols. 1 and 2, my AUTHORIZED companions to Crossovers: A Secret Chronology of the World Vols. 1 and 2 by Win Scott Eckert, debuting at the Meteor House booth at PulpFest/FarmerCon in Columbus, OH on July 21-24!
Posted by Sean Levin at 2:59 PM