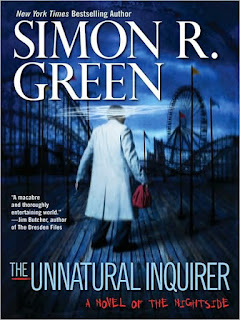 Hey, like spy fiction such as the James Bond novels, The Avengers, The Man from U.N.C.L.E., and Get Smart?


Then you'll love this entry in Simon R. Green's Nightside series, in which characters from all those series have an unnamed cameo at Strangefellow's Bar and Grill, though their gadgetry makes their identities clear. And that's far from the only crossover in this book!


For all the details on the crossovers in this, the other Nightside novels, and most of Green's other works, read my books Crossovers Expanded Vols. 1 and 2, AUTHORIZED companions to Win Scott Eckert's Crossovers: A Secret Chronology of the World Vols. 1 and 2, available from Meteor House in late July!