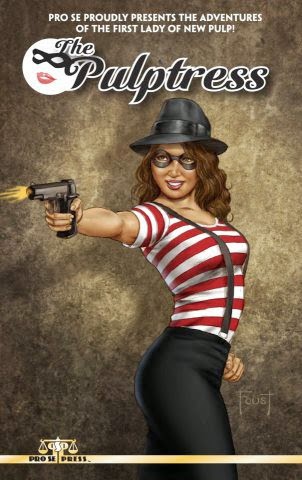 This anthology features the Pulptress, the daughter of two of the greatest (unidentified) pulp heroes of all time, who after being orphaned as an infant was trained as a crimefighter by her parents' colleagues. Several of the stories are crossovers with other New Pulp heroes, most of whom are in the CU through other crossovers. Derrick Ferguson's "Black Mask, Big City" features a guest appearance by Derrick's hero Dillon, who is revealed to be one of the Pulptress' former teachers. In Ron Fortier's "Butcher's Festival," the Pulptress joins forces with Ron's undead vigilante Brother Bones. Erwin K. Roberts' "Voice to a New Generation" has the Pulptress working with Roberts' hero the Voice, also a second generation pulp hero, and Dillon is mentioned. "The Bone Queen" by Andrea Judy has the Pulptress battling the titular supernatural villain, whose origin Judy later revealed in the novel The Bone Queen. Derrick also has a Dillon novel in the works that has appearances by the Pulptress and his character Fortune McCall. As that link shows, Derrick also has a crossover in the works between Dillon and Elisa Hill of Percival Constantine's Myth Hunter series. The Li Shoon mentioned in the plot synopsis for that book is a Yellow Peril villain created by H. Irving Hancock, who appeared in the pulp Detective Story Magazine.