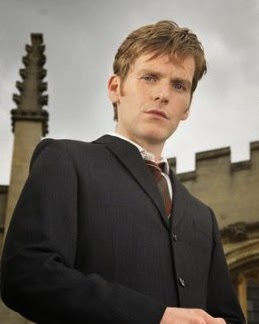 Colin Dexter has written a series of novels about Inspector Endeavour Morse, which were made into a 33-episode TV series that ran from 1987-2000. Morse's partner Inspector Lewis eventually got his own spin-off. In 2012, the television series Endeavour debuted, a prequel series featuring the young Constable Morse in the 1960s. The show, which has run two seasons so far, with a planned third next year, has had many references to other works of pop culture, including some that have already been linked to the Crossover Universe. The Morse of the novels would be older than the television version of the character in the mid-60s, and therefore it can be assumed that the TV Morse is in the CU, and his literary counterpart, who has no crossover connections, is in an alternate reality to the CU. What follows is an episode-by-episode breakdown of the crossovers found in the series.

In the TV movie that led to the series, Morse is seconded from the Carshall Newtown police force to Oxford to investigate the murder of a 15-year-old girl. In the end, Morse decides to transfer to Oxford full-time. Morse’s new landlady tells him that the other two lodgers are named Goldberg and McCann. Carshall New Town (or Newtown as it is spelled here) is the setting of Angus Wilson’s novel Late Call, while Goldberg and McCann are from Harold Pinter’s play The Birthday Party. Both the movie and Series 1 take place in 1965.

In the second episode of Series 1, "Fugue," Morse attempts to apprehend a serial killer whose methods are based on the deaths of characters in various operas. Chief Superintendent Bright calls in Dr. Daniel Cronyn, an expert on serial murders, as a consultant on the case. Cronyn refers to killings in the States in the last ten years: the Starkweather case, the bodies in the swamp at Fairvale, and DeSalvo in Boston. The bodies in the swamp at Fairvale are a reference to Alfred Hitchcock’s film Psycho, based on Robert Bloch’s novel of the same name. Since Psycho takes place in the CU via a reference in Christopher Farnsworth’s novel Red, White and Blood, we have the first piece of evidence that Endeavour is as well.

In the third episode, "Rocket," Morse looks into the death of a worker at a munitions factory owned by the Broom family, which occurred during a visit by Princess Margaret. The factory’s union shop steward is Reg Tracepurcel. The youngest Broom, Johnny, boasts to Morse that his car is the new Bellini. The Bellini is a fictional brand of car driven by Raymond Delauney in the 1960 film School for Scoundrels. Some elements of this episode’s plot reference the British film I’m All Right Jack, which featured a character named Bertram Tracepurcel. Perhaps Bertram and Reg are related. I’m All Right Jack starred Terry-Thomas, who also played Raymond Delauney in School for Scoundrels. The plot is also heavily influenced by the movie The Lion in Winter, but none of the references to that film count as crossovers.

The fourth and final episode of Series 1 is "Home," in which Morse investigates the hit-and-run killing of an Oxford don. One of the suspects in the case is retired gangster Vic Kasper, who is now persona non grata with Sid and Gerald Fletcher. Later, one of Vic’s employees tells the ex-criminal’s son Vince (who is secretly in a partnership with the Fletchers on a construction deal) that Thorpey is on the phone. Gangsters Sid and Gerald Fletcher are Jack Carter’s bosses in the 1971 film Get Carter. One of the gangsters in Get Carter is named Thorpe (also referred to as “Thorpey”), and is an old acquaintance of Jack’s. Thorpe must have worked for the Fletcher brothers for a time before switching his loyalties to rival crime boss Cyril Kinnear.

Series 2 takes place in 1966. In the first episode, "Trove," Morse investigates an apparent suicide, a missing girl, and the theft of valuable Anglo-Saxon treasures from Beaufort College, with the first two cases turning out to be intimately connected. Miss Great Britain, Diana Day, launches Burridge’s Spring into Summer Fashion Collection. Morse passes a billboard advertising Grimsby Pilchards, and interviews Diana’s manager Val Todd, whose wife tells him that Mr. White from Play-Tone called. In Soho, Morse visits the third floor office of the apparent suicide, a private investigator, which is in a building that also hosts the Pacific All-Risk Insurance Co.; the Ex-Officers’ Employment Bureau, Est. 1917; and R. Duck, Theatrical Agent, 4th Floor. Later, Morse questions Todd about his connection to the missing girl, who has turned up dead. Todd’s wife interrupts again, to tell him that Lane from SCDP is on the phone. Burridge’s Department Store is from the film Trouble in Store. Grimsby Pilchards appeared in “The Bowmans,” an episode of the British sitcom Hancock, bringing comedian Tony Hancock’s fictional persona Anthony Aloysius Hancock into the CU. Mr. White is the talent agent for Play-Tone Records played by Tom Hanks in the 1996 film That Thing You Do!, which is set in 1964. The Pacific All-Risk Insurance Co. is from Billy Wilder’s film noir Double Indemnity. Evidently Pacific All-Risk has offices in both America and Britain. The Ex-Officers’ Employment Bureau, Est., 1917, is one of the alleged businesses in the building in Fitzrovia that is actually the headquarters of the intelligence agency WOOC(P) in Len Deighton’s Harry Palmer novels. Apparently WOOC(P) also kept an individual office in Soho. In the 1987 film Withnail and I, set in 1969, Withnail’s Uncle Monty, an actor, says that his first agent was “Raymond Duck…four flights up at Charing Cross…” At some point after the end of his representation of Uncle Monty, Duck must have taken up a new office in Soho. Obviously, he preferred his offices to be on the fourth floor. Lane is Lane Pryce, co-owner of the advertising agency Sterling Cooper Draper Pryce (SCDP), as seen on the television series Mad Men, which is set in the years 1960-1969. In “The Moms,” an episode of the sitcom 30 Rock, Liz Lemon’s mother reveals that she once worked at Sterling Cooper, SCDP’s forerunner, thus bringing that show into the CU as well.

In the second episode, "Nocturne," Morse investigates a murder at a museum, and visits a girls’ school in Slepe that was having a field trip to the museum when the man was killed. A signpost giving directions to Slepe, Midwich, and Crampton Hodnet is seen. One of the students is named Bunty Glossop, and the groundskeeper’s son is Billy Karswell. Morse also questions an elderly couple that visited the museum on that day, Nahum and Tabby Gardiner of Kingsport, Massachusetts. Morse walks past the billboard for Grimsby Pilchards again, which now has graffiti on it of the name “Titch Thomas.” Morse and his superior, Detective Inspector Fred Thursday, visit the College of Arms in London, where the victim was formerly employed. They are told that Sir Hilary is on holiday. The murder soon turns out to be connected to an unsolved homicide from a century ago, which was investigated by Detective Constable Cuff. Midwich is from John Wydnham’s novel The Midwich Cuckoos. Crampton Hodnet is from Barbara Pym’s novel of the same name. Bunty Glossop is probably a relative of the Glossop family seen in P.G. Wodehouse’s Jeeves novels, while Billy Karswell and his father Wilf are likely relatives of Karswell from M.R. James’ story “Casting the Runes.” Despite the slight difference in the spelling of their surnames, Nahum Gardiner may be a relative of Nahum Gardner from H.P. Lovecraft’s “The Colour Out of Space.” Kingsport, Massachusetts is a recurring locale in Lovecraft’s Cthulhu Mythos. Titch Thomas is from Philip Larkin’s poem “Sunny Prestatyn.” In Ian Fleming’s novel On Her Majesty’s Secret Service, Sir Hilary Bray is a genealogist at the College of Arms whom James Bond briefly impersonates. Detective Constable Cuff may be related to Sergeant Cuff from Wilkie Collins’ The Moonstone.

Episode 3, "Sway," utilizes Burridges Department Store again, but has no other crossovers that I know of.

The final episode of Series 2, "Neverland," has Morse visiting the law offices of “Vholes, Jaggers, Lightwood, Solicitors” in the course of a case. The members of the law firm must all be descendants of lawyers from the works of Charles Dickens: Mr. Vholes (Bleak House); Mr. Jaggers (Great Expectations); and Mortimer Lightwood (Our Mutual Friend.)

The episode title "Trove" is vastly appropriate, as this series has been a treasure trove of crossovers. Hopefully Series 3 will continue that pattern.