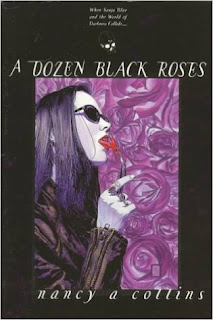 The heroic vampire Sonja Blue encounters the vampire sect known as the Camarilla. The Sonja Blue series is already in the CU via a mention of the Aegrisomnia, an occult tome from that series, in Collins’ Cthulhu Mythos story “The Land of the Reflected Ones,” among other crossovers. The Camarilla are from White Wolf’s role-playing game Vampire: The Masquerade. The game presents a very different take on the nature of vampires than most accounts set in the CU, as well as a version of Dracula that is difficult to reconcile with most stories involving that infamous nosferatu. Therefore, this story must feature the CU version of the Camarilla, and does not import the continuity of Vampire: The Masquerade wholesale.