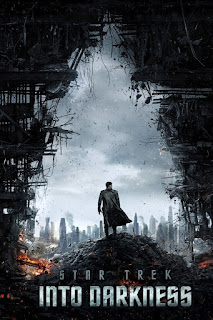 A sequel to Abrams’ 2009 Star Trek film, which takes place in a divergent timeline from the “mainstream” Trek universe/Crossover Universe. Montgomery “Scotty” Scott and Keenser visit a bar by the Port of San Francisco where the tables have a rotating light-up billboard for Slusho, a fictional soft drink appearing in other Abrams productions, including Fringe, Super 8, Cloverfield, Alias, and the 2009 Star Trek film, as well as the television series Heroes, which was not created by Abrams.