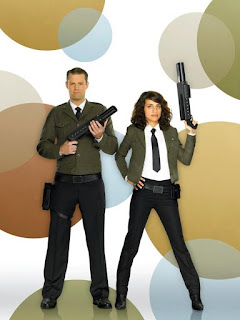 Javier Grillo-Marxuach and Les McClaine's comic The Middleman features the title character and his sidekick Wendy Watson battling threats to the world for the Organization Too Secret to Know (O2TSK). There have been several Middlemen throughout history. In the story "The League of Professional Jealousy," Dr. Van Helsing and Jonathan Harker set out to destroy Dracula, only to find they have been beaten to the punch. Soon after, Phileas Fogg returns to the Reform Club after finishing his eighty-day trek around the world, only to find out his time has been beaten by the same person who stole Van Helsing’s thunder: the Middleman. Van Helsing enlists Nikolai Tesla to help him and Fogg get their revenge, which involves Van Helsing spreading rumors of a demonic hound in the moors of Devonshire. However, Tesla actually helps the Middleman outwit Van Helsing and Fogg. Learning there are now reports of a seemingly real "Hound of the Baskervilles" in Devonshire, the Middleman later sends a letter to Holmes and Watson telling them he has already solved the mystery, and he is off to the high seas, where a maniac has been ramming cargo ships with a submarine. This story is a parody, and Van Helsing and Fogg are both out of character. Additionally, the year is given as 1897, whereas in the CU Dracula took place in 1887, Around the World in Eighty Days in 1872, The Hound of the Baskervilles in 1888, and 20,000 Leagues Under the Sea in 1866–1868. Therefore, I place the comics in an AU. However, the comic does have a TV adaptation with crossover references of its own, which fits much better into the CU. The O2TSK is also mentioned in The Librarians episode "The Librarians and the Apple of Discord."

In "The Sino-Mexican Revelation," the Middleman and Wendy visit Schlermie Beckerman Memorial Square and Alfred Necessiter Memorial Hospital. Beckerman and Necessiter are from the movie The Man with Two Brains. In "The Manicoid Teleportation Conundrum," the Middleman has a rendezvous with Wendy at Lyon Estates. Wendy discovers a bomb is hidden at Twin Pines Mall. Ida, the Middleman’s android assistant, says a headless murder victim lived at Eastwood Ravine Drive. Lyon Estates and Twin Pines Mall are from the film Back to the Future. Eastwood Ravine Drive is named after the Eastwood Ravine from Back to the Future Part III. In "The Ectoplasmic Panhellenic Investigation," Eleanor Draper’s honors include the Egon Spengler Memorial Award and the Ivo Shandor Medal. Both individuals are from the movie Ghostbusters. In "The Clotharian Contamination Protocol," a NASA employee is named Lethbridge-Stewart. A "Zygon-Rated" containment box appears. The Nakatomi Protocol expands the vents in Middleman HQ to human size, allowing the Middleman to crawl through them in case of an emergency. A Clotharian bomb has writing on it in Aurebesh. Lethbridge-Stewart is probably related to the CU counterpart of Brigadier Alistair Gordon Lethbridge-Stewart from Doctor Who. The Zygons are an alien race also seen in Doctor Who. The Nakatomi Protocol appears to have been inspired by John McClane crawling through the vents of the Nakatomi Plaza building, as seen in the movie Die Hard. The Aurebesh language is from the Star Wars film series. In "The Palindrome Reversal Palindrome," the Middleman and Wendy investigate the theft of a Beryllium Sphere and an Oscillation Overthruster. A collection of stolen doll eyes is made of polydichloric euthimal. The Middleman has a phased polaron cannon in his weapons archive. Beryllium spheres are from the movie Galaxy Quest, while the Oscillation Overthruster is from the movie The Adventures of Buckaroo Banzai Across the Eighth Dimension. Polydichloric euthimal appears in the movies Outland, Terminator 2: Judgment Day, and The Relic, based on Douglas Preston and Lincoln Child’s novel Relic. Outland must take place in an alternate future. The future seen in the Terminator movies is also an alternate timeline to the established future of the CU. The novel Relic has already been established as taking place in the CU, so the events of the movie must occur in an alternate reality as well. Phased polarons are from Star Trek.