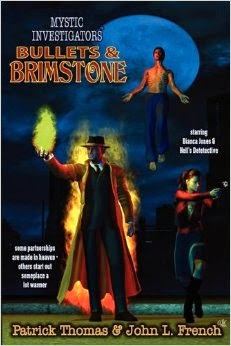 Negral, a Sumerian fire god turned Hell’s chief of security, meets Baltimore Police Detective Bianca Jones, who regularly combats the occult. The Department of Mystic Affairs told Bianca about Negral. Negral doubts Hex or Paddy Moran are very fond of him. French’s Bianca Jones is already in the CU, as is Thomas’ Paddy Moran from his Murphy’s Lore series. Negral (aka Hell’s Detective), the Department of Mystic Affairs, and Hex have also appeared in the Murphy’s Lore novels, as well as in spin-off books of their own, thus establishing that Thomas’ Murphy’s Lore Universe is a subset of the CU.