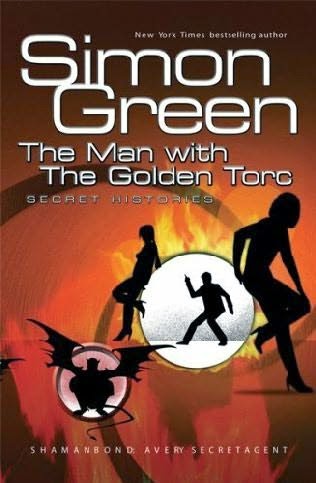 Eddie Drood, aka Shaman Bond, is a member of the Drood (née Druid) clan that protects the world from supernatural threats. He is suddenly inexplicably declared a rogue by his family, who set out to kill him. He strives to learn the reason why. The Secret Histories books are set in the same universe as the Nightside series and other works by Simon R. Green. Appearing or mentioned in this book are: a Time Agent whose latest regeneration has gone terribly wrong, turning him inside out (a reference to Doctor Who and Torchwood); the Necronomicon (from Lovecraft's Cthulhu Mythos, of course); a Kandarian possessing amulet (referencing the Evil Dead films); the Old Ones (another Mythos reference); a Hyde using a distillation of Jekyll’s old formula (from Robert Louis Stevenson's novel); Rossum’s Unionized Robots (a reference to Karel Capek's play R.U.R.); a 1930s powder blue Hirondel convertible sports car (the same fictional brand of car driven by Simon Templar, aka the Saint); Alice Little (aka Alice Liddell of Alice's Adventures in Wonderland fame); Penelope Creighton (presumably a relative of Lady Penelope Creighton-Ward from Thunderbirds, which probably takes place in an AU); Area 52 (located in the Antarctic, and therefore presumably the same Area 52 seen in the Image Comics series of the same name); taduki (from the Allan Quatermain novels); Martian red weed (from Wells' The War of the Worlds); the Arcadia Project (from the Nightside book Hell to Pay); Vril Power Inc. (based on the Vril from Edward Bulwer-Lytton's The Coming Race); the Lurkers on the Threshold (a reference to August Derleth's The Lurker at the Threshold); Arne Saknussemm (from Jules Verne's Journey to the Center of the Earth); Cave Carson (a longtime DC Comics hero); a stuffed moomintroll (from Tove Jansson's Moomin books); a statue of a black bird (the Maltese Falcon); a small black lacquered puzzle box (a Lament Configuration from the Hellraiser films); the Holy Hand Grenade of St. Antioch (from the film Monty Python and the Holy Grail, which would be a greatly exaggerated account of the quest for the Grail); scrimshaw carved from the bones of a great white whale (Moby Dick); and Baron von Frankenstein.
Posted by Sean Levin at 9:33 AM