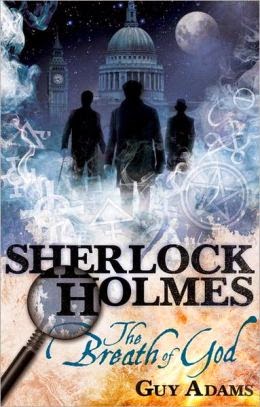 Sherlock Holmes, Dr. Watson, and Thomas Carnacki against Aleister Crowley, Julian Karswell, and Dr. John Silence. Carnacki is the archetypal occult detective, created by William Hope Hodgson. Karswell is from M.R. James’ story “Casting the Runes,” though his first name of Julian comes from Jacques Tourneur’s film version of the story, Night of the Demon. Dr. Silence is another occult investigator appearing in six stories by Algernon Blackwood. There are also references to Dr. Hesselius (from “Green Tea” and other stories by J. Sheridan Le Fanu), Lawrence Van Helsing (from Hammer Studios’ Dracula films), Charles Kent (from the Hammer film Dracula: Prince of Darkness), and Mocata Grange (from Adams’ Big Finish audio play Iris Rides Out, featuring Carnacki and Iris Wildthyme, a character created by Paul Magrs for his Phoenix Court novels, who was revealed to be a Time Lady in his tie-in fiction for Doctor Who; the name Mocata Grange is an allusion to the occultist Mocata from Dennis Wheatley’s novel The Devil Rides Out.) This novel takes place December 27, 1899-New Year’s Day, 1900. However, Dr. Silence’s portrayal as a villain (albeit misguided rather than truly malevolent) and his death do not fit with Blackwood’s tales. Additionally, Kim Newman’s serial novella “Seven Stars” establishes that in the CU, Dr. Silence was still alive and active in 1942. Therefore, I have placed this novel in an AU.
Posted by Sean Levin at 8:43 AM