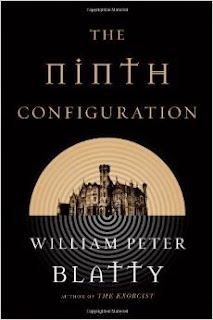 Among the U.S. Army soldiers being treated by Colonel Vincent “Killer” Kane at an insane asylum based in a castle is astronaut Billy Cutshaw, who has a fear of dying in space. Cutshaw is meant to be the same unnamed astronaut who is told by a possessed Regan MacNeil that he will die in space in Blatty’s novel The Exorcist. Since The Exorcist takes place in the CU, so does this novel.

Email ThisBlogThis!Share to TwitterShare to FacebookShare to Pinterest
Labels: Crossover Covers, The Exorcist