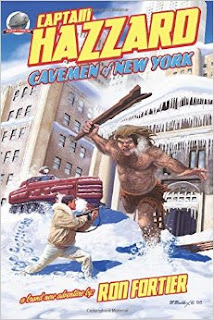 Captain Hazzard battles mad scientists Professor Marko Steil and Doctor Henry Moreau. Moreau’s grandfather was the subject of a factual book by H.G. Wells that was published under the guise of fiction. FBI agent Ernest Grogan works with Hazzard to end the threat. Pulp writer Lester Dent arranges for Annie Brennan to transport one of Hazzard’s vehicles aboard her tugboat, the Narcissus. Henry Moreau’s grandfather was the subject of H.G. Wells’ novel The Island of Doctor Moreau. Fortier gives Wells’ Moreau the same first name, Alphonse, given to him by Alan Moore and Kevin O’Neill in The League of Extraordinary Gentlemen, Volume II. Ernest Grogan is based on Eric Gordon from Donald E. Keyhoe’s Dr. Yen Sin pulp novels. Gordon was a reporter in the original stories, but he and Michael Traile were often aided by the FBI, so it is possible that he joined the Bureau after his and Traile’s last recorded encounter with Yen Sin. “Grogan” first worked with Hazzard in Fortier’s The Citadel of Fear. Annie Brennan is better known as Tugboat Annie from a series of stories by Norman Reilly Raine, and also appeared in three films and a television series, each of which had her being portrayed by a different actress.