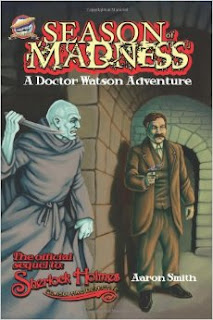 Dr. Watson teams up with Dr. John Seward to investigate a rash of madness in London. It is stated that Jack the Ripper’s murders happened a decade ago, which would suggest that this novel takes place in 1898. However, the events of Dracula are described as having taken place “many months” ago, whereas in the CU it took place in 1887. Additionally, the portrayals of the Ripper, Elizabeth Bathory, and Irene Adler conflict with CU continuity, placing this book in an alternate universe. Also included in this book is the story "Attack of the Electric Shark," in which British Secret Service agent Quincey “Hound-Dog” Harker unearths the Nautilus to use in battle against another submersible called the Electric Shark. Quincey Harker’s portrayal here is irreconcilable with that in the Marvel Comics series Tomb of Dracula. Additionally, it is stated that a long-forgotten civilization (possibly Atlantis) created both the Nautilus and the Electric Shark, which contradicts Twenty Thousand Leagues Under the Sea and The Mysterious Island.