Crossover Covers: Ghost of a Chance 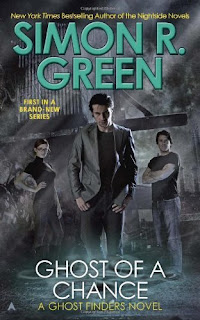 J.C. Chance, Melody Chambers, and Happy Jack Palmer are field agents of the Carnacki Institute, a group devoted to investigating ghostly activity. Their latest case, a haunting in London’s Oxford Circus Tube Station, bring them into contact with the ghost of a young woman named Kim Sterling, with whom J.C. falls in love; Natasha Chang and Erik Grossman, two members of the Institute’s rival, the Crowley Project; and the Great Beast known as Fenris Tenebrae. J.C. boasts, “Remember…when the Ghostbusters have a headache; when the Scooby gang are having a panic attack; when Mulder and Scully don’t want to know and the psychic commandos of the SAS are sitting in a corner crying their eyes out…Who do you send for? The specially trained field agents of the Carnacki Institute!” Melody refers to other Great Beasts, such as the Hogge or the Serpent. The head of the Institute, Catherine Latimer, refers to J.C.’s recent acquisition of a folio copy of the damned and utterly poisonous play The King in Yellow. Happy says that they are not trained, equipped, or armed enough to deal with Great Beasts or Outer Monstrosities, or any of the Abominations. Natasha reminds Erik of the Case of the Horse Invisible, last year. J.C. doesn’t know anyone who’s actually encountered Frankenstein tech in the field before. He also has a Hand of Glory made from a monkey’s paw. The Carnacki Institute is named for Thomas Carnacki from William Hope Hodgson’s book Carnacki the Ghost-Finder. The Hogge is a reference to the titular being from the Carnacki story “The Hog.” The Outer Monstrosities are mentioned in both “The Whistling Room” and “The Hog.” The Case of the Horse Invisible must be connected to the Carnacki story “The Horse of the Invisible.” The Ghostbusters are from the film of the same name and its sequel. The Scooby Gang is the nickname Buffy Summers and her allies use for themselves on the TV series Buffy the Vampire Slayer. Mulder and Scully are from the TV series The X-Files. The Serpent may be the Serpent in the Sun from Green’s novel Drinking Midnight Wine. The play The King in Yellow is from Robert W. Chambers’ short story collection of the same name. Frankenstein tech is named after the scientist from Mary Shelley’s novel Frankenstein. The Hand of Glory made from a monkey’s paw is a nod to W.W. Jacobs’ short story “The Monkey’s Paw.”