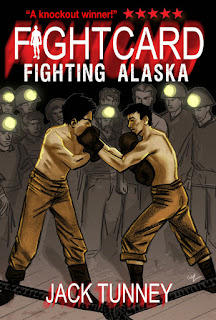 At the Hotel Carlton in San Francisco, boxer Jean St. Vrain and his friend Pete Lally argue over Pete’s idea of heading to Nome, Alaska to take over a gold claim, causing the Hotel’s elderly owner to intervene. The owner of the Hotel is Paladin from the radio and television series Have Gun – Will Travel, who apparently took over the Hotel after merely being a permanent resident there in both series’ original runs. The book takes place in 1900.

Email ThisBlogThis!Share to TwitterShare to FacebookShare to Pinterest
Labels: Crossover Covers, Have Gun - Will Travel