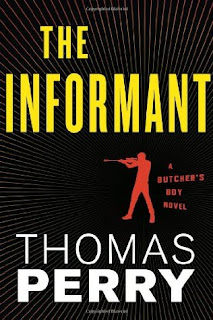 The hitman known only as the Butcher’s Boy seeks revenge on the Mafia. Among the mobsters gathered for a meeting are Paul Castiglione, Phil Langusto, Salvatore Molinari, Giovanni “Chi-chi” Tasso, and Danny Spoleto, an underling for Mike Catania. The various Mafiosi first appeared in Perry’s novel Blood Money, the third book in a series featuring Jane Whitefield, a Native American woman who helps people who need to disappear create new identities. The Butcher’s Boy appeared under the alias “the Grocer’s Boy” in Justin Gustainis’ novel Sympathy for the Devil, the third entry in his Morris and Chastain Supernatural Investigations series, which has many crossover references bringing it into the CU. This crossover brings in Jane Whitefield.