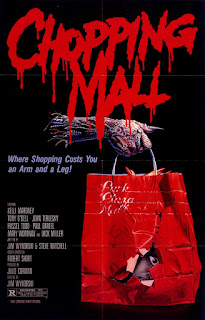 Janitor Walter Paisley appears, as do gourmets Paul and Mary Bland. Walter Paisley is played by Dick Miller, who first played the role in the film A Bucket of Blood and went on to reprise it in a number of other films, including The Howling, which Win included in Volume 2. Walter’s apparent death here should not be taken at face value, just as his apparent death in A Bucket of Blood should not. Paul and Mary Bland are played by Paul Bartel and Mary Woronov, who originated the roles in Bartel’s 1982 film Eating Raoul.