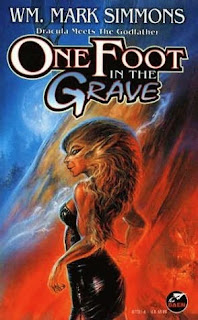 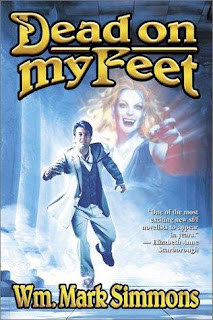 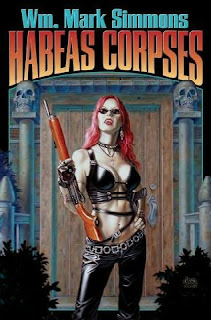 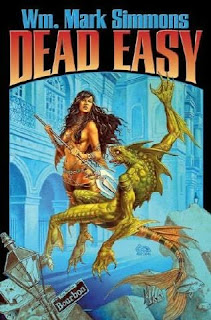 Chris Cséjthe finds his life turned upside down when he discovers vampires, werewolves, and other supernatural creatures exist, and he himself is now halfway through the transition between human and vampire. Dracula appears prominently in the first novel, One Foot in the Grave, as do tanis leaves, legends of which inspired the tana leaves in Universal Studios’ Mummy movies. A vampire named Barnabas who carries a wolf’s head cane appears; this is Barnabas Collins of Dark Shadows fame. A New Orleans vampire enclave with literary pretensions is mentioned, a reference to Anne Rice’s The Vampire Chronicles. In the fourth book, Dead Easy, Chris encounters the Great Old Ones and Captain Nemo. Nemo tells Chris Professor Aronnax was fictional and Verne made The Mysterious Island up out of whole cloth. Nemo died in the 19th century, and was later resurrected as a rakshasa, a spirit being from Hindu mythology. Several individuals experienced in dealing with the supernatural are mentioned: a wizard in Chicago (Harry Dresden from Jim Butcher’s The Dresden Files novel series); a necromancer in St. Louis (Anita Blake from novels by Laurell K. Hamilton); a waitress in Bon Temps (Sookie Stackhouse from Charlaine Harris’ Southern Vampire Mysteries); a weather warden (Joanne Baldwin, the protagonist of a series by Rachel Caine); and a guardian in London (Aisling Grey from novels by Katie MacAlister). Simmons’ take on Captain Nemo is very different from his established history in the CU. Combined with the fact both Sookie Stackhouse and Anita Blake’s exploits take place in worlds where the public is aware vampires and other supernatural entities are real, this places The Halflife Chronicles in an alternate universe.