Crossover Cover: Indiana Jones and the Cup of the Vampire 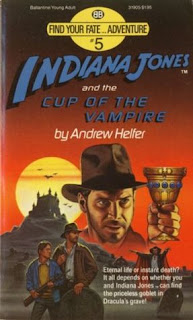 Indiana Jones and Mihail Tepes, a descendant of Dracula, hunt for the Cup of Djemsheed, which grants eternal life to those who drink human blood from it, encountering the Romanian Anti-Vampire League and other foes in the process. The Cup is buried in the grave of Dracula himself. Indy inadvertently awakens Dracula, who wipes out the League. This book allows you to choose what courses of action Indy takes, and gives corresponding page numbers to flip to for the outcome of those actions. Indy’s awakening of Dracula is the most likely final outcome for the CU. It is implied drinking from the Cup of Djemsheed is what turned Dracula into a vampire, but there were probably more factors at work than just that.