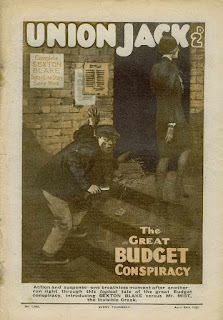 Sexton Blake and Mr. Mist (Ian Craig, a disfigured scientist who uses an invention called the Invicta Ray to become invisible) fight Rudolph Kent, a vicious blackmailer who also runs a drug-smuggling ring in Limehouse. Assisting Blake and Mist is Inspector Red Berry. This story is the third part of the “Mr. Mist” storyline starring Blake. “Berry” is clearly Inspector Red Kerry from Sax Rohmer’s Dope, Tales of Chinatown, and Yellow Shadows. The first two chapters, appearing in #1277 and #1278, were titled “The Man Who Walked by Night” and “The Phantom of Scotland Yard” respectively. The fourth and final chapter, “The Mystery of the Missing Mace,” appeared in #1281, and had several references to “Berry.”