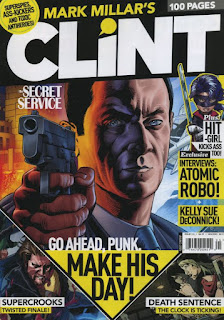 Spy Jack London trains his nephew Gary in the art of espionage. After Jack is shot and killed, Gary toasts his uncle with London’s own trainer, Rupert Graves, who says, “Your uncle and I toasted a lot of old pals over the years. Steed. Gambit. Even some of the old timers like Drake and Templar." Apparently John Steed (The Avengers and The New Avengers), Mike Gambit (also from The New Avengers), John Drake (Danger Man/Secret Agent and The Prisoner), whose birthday is today, and Simon Templar (aka the Saint) have all died or faked their deaths by the time this story takes place. The year is 2009 based on a reference to Elton John trying to adopt. The Secret Service is supposed to take place in the same universe as several of Millar’s other comic books, including Wanted, Kick-Ass, Nemesis, MPH, Superior, and Supercrooks. However, including all of these series would bring in many more superheroes and supervillains than can smoothly fit into the Crossover Universe. Furthermore, Wanted portrays the world as secretly controlled by supervillains, which also does not fit with CU continuity. Therefore, the events of The Secret Service must have occurred in both the CU and the “Millar-verse.”

For the record, I'm not a fan of Millar's writing, and Civil War in particular is one of my most hated comics of all time, so much so that I'm glad they're jettisoning most of Millar's plot for the film. That said, my policy is not to exclude works that have a valid link to the CU simply because I dislike them or their author. I know my tastes are not everyone else's, and there are works I love that are in the CU that not everyone in my circle of friends enjoys as much as I do.