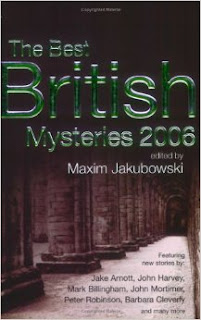 Besides Kim Newman's "A Shambles in Belgravia," which Win included in the original Crossovers, this anthology includes the story "Ten Lords A-Leaping" by Jake Arnott. Friedrich Engels brings Lord Beckworth, a friend of a friend, to meet Karl Marx. Beckworth tells the two nine generations of Beckworths before him have fallen to their death. Two days later, when they pay call on him, Inspector Bucket tells them Beckworth has taken a fatal fall. Marx and Engels finally expose the killer, whom Bucket takes into custody. A week later, Engels meets with Marx outside the British Museum, where the latter says goodbye to a young man with a tweed cap of a type Engels does not recognize. The youth has recently left university and currently resides in Montague Street. He is interested in criminology, and Marx discerns from their conversation he wishes to be a detective. Marx adds, "He is working on a puzzle presented to him by a high-born friend of his from college, a superstitious observance of an ancient family known as 'the Musgrave Ritual.'" Engels and Marx were both real people, and among the first major leaders of the modern Communist party. Inspector Bucket is from Charles Dickens’ Bleak House. Bucket, middle-aged during the events of Dickens’ novel, must be pushing hard against retirement in this story. The young man is, of course, Sherlock Holmes. William S. Baring-Gould dated "The Adventure of the Musgrave Ritual" to October 2, 1879, so the story must end on that date and begin in late September.