Crossover Covers: Last of the Albatwitches 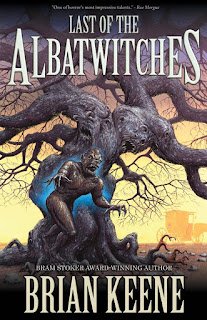 Levi Stoltzfus battles a murderous cryptid released into Pennsylvania by the Globe Corporation after being captured on an island. The serial killer known as the Exit is mentioned. There are references to Leviathan, the Siqqusim, and a race of prehistoric, aquatic reptiles known as the Dark Ones. Levi thinks about his friend Dez, a chaos mage. The Goat-Man of LeHorn’s Hollow is mentioned. The Cryptid Hunter TV series has been in the area filming a special on the legendary giant water snake Old Scratch. Levi places a call to Maria Nasr. There is a rumor that the heads of the Globe Corporation worship a being called Kat. Levi is familiar with the infamous Crazy Bear Valley sighting.The cryptid is one of the “tribe” from Keene’s novel Castaways. The Globe Corporation is a recurring, if mostly background, element of Keene’s fiction. The Exit is from Keene’s short stories “I Am an Exit” and “This is Not an Exit.” Leviathan is one of the Thirteen, and appears across Keene’s multiverse, especially in the worlds of the Earthworm Gods series and Clickers III: Dagon Rising. The Siqqusim serve Ob, another of the Thirteen, and are seen primarily in the worlds of Keene’s The Rising series and Clickers vs. Zombies. The Dark Ones mentioned here must be the CU versions of the Dark Ones that appear in the Clickers series by Keene and J. F. Gonzalez. Dez is the CU version of the character that appears in Keene’s alternate universe novel Darkness at the Edge of Town. The Goat-Man is from Keene’s Dark Hollow. Old Scratch is from Keene’s story “Scratch.” Maria Nasr appears in Keene’s novel Ghost Walk and the story “The Witching Tree.” Kat is another of the Thirteen, who has thus far not appeared directly in any of Keene’s work. The Crazy Bear Valley sighting is from Keene’s story “An Occurrence in Crazy Bear Valley.”