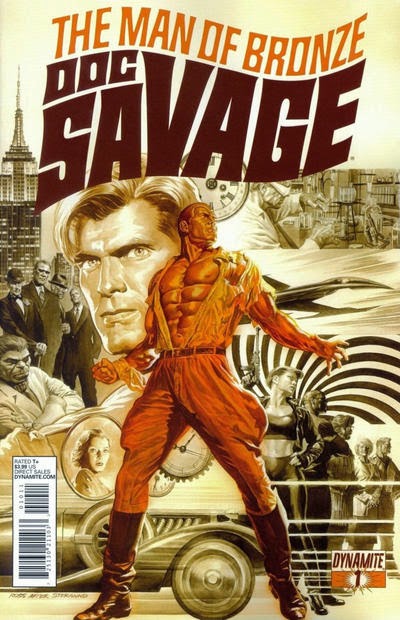 In the opening captions, Doc says, “Unlike a few of my associates, I embrace the light rather than the shadows…I don’t want to believe there is a vast web of evil forcing me to adopt sinister methods in order to confront those who live its embrace…no desire to fight evil by impersonating it.” Doc is alluding to the Shadow, the Spider, and the Avenger. Later, Doc receives a letter in a pneumatic tube and says “Looks like we have a message…provided we’re not getting Allard’s mail again.” Kent Allard is the Shadow’s real name in the pulps. Doc uses slang in this story, something he seldom did in the original stories, and is shown as going into a bloody rage against German soldiers over the death of a friend in a flashback to World War I, which seems wildly out of character for Doc. One of Doc’s aides says “It kinda looked cool,” despite the fact that the word “cool” was not used in that context in 1930, when this story takes place, and Ham refers to Doc as “Clark,” something unheard of in the original pulps. Most significantly, it is implied that the villain of this piece was responsible for the death of Doc’s mother, which does not fit with Farmer’s account of her death in Doc Savage: His Apocalyptic Life. Therefore, I am treating this story as an AU.
Posted by Sean Levin at 6:57 AM