Crossover Covers: To Be More Than Human 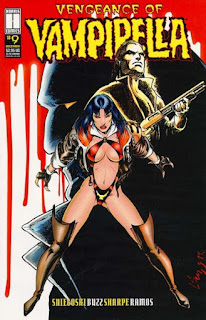 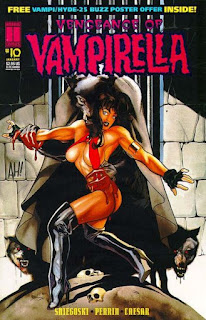 Vampirella intervenes when her lover Adam Van Helsing, having taken the transformative drug Hyde-25, attempts to kill Samuel Bishop, aka the Jackass, whose own great-great-grandfather’s genes were altered by exposure to the drug a century ago. Hyde-25 is originally from “Night of the Jackass,” a strip by Bruce Bezaire and Jose Ortiz that appeared in the Warren magazine Eerie. Samuel Bishop, the great-great-grandson of Claude Bishop from “Night of the Jackass,” first appeared in “Return of the Jackass” by Tom Sniegoski, Jim Webb, and Steve Mitchell, Hyde-25 #0, Harris Comics, April 1995. The name “Hyde-25” is derived from Dr. Henry Jekyll’s alter ego Edward Hyde.