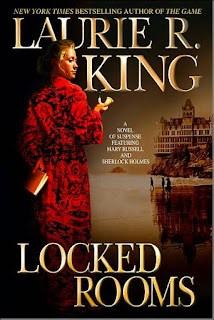 Sherlock Holmes and Mary Russell are in San Francisco, where they cross paths with writer Dashiell Hammett, who tells Mary her former psychiatrist was murdered using “some kind of bird carving…an owl maybe, from Rhodes or Crete or something in the Mediterranean.” The statue used to murder Russell’s psychiatrist will later become the subject of a book by Hammett entitled The Maltese Falcon.