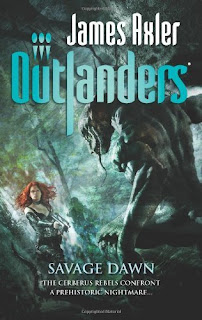 The Outlanders series, written by various authors under the pseudonym “James Axler,” is set in a future incompatible with the one seen in the Star Trek franchise. This particular novel is by Douglas P. Wojtowicz. Kondo says of a subterranean empire filled with dinosaurs, “It’s amazing that no one has ever stumbled upon it.” Remus replies, “Some have. But the tales were so astounding that those who lived in the world above relegated them to flights of fancy, instead of the true exploits of men such as George Edward Challenger or David Innes.” Besides this reference, Wojtowicz's Wings of Death establishes that one of the series' main characters, Kane, is the reincarnation of Solomon Kane.