Crossover Covers: A Gathering of Crows 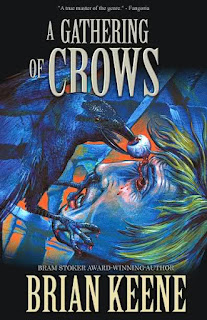 In Brinkley Springs, West Virginia, Levi Stoltzfus, the ex-Amish magus, battles agents of Meeble of the Thirteen. Former soldier Donny Osborne served with the likes of Tyler Henry, from York, Pennsylvania, and Don Bloom, who went AWOL and was rumored to have joined Black Lodge. Levi is familiar with Cthulhu cultists, and has an e-reader that contains scanned pages from the Necronomicon. A supernatural entity called “Mrs. Chickbaum” is mentioned. Nyarlathotep is named. Levi is familiar with the siqqusim. “That crazy Earl Harper wingnut” and Teddy Garnett are mentioned. Levi walks through the Labyrinth with a group of survivors, one of whom observes in the various realities zombies, “something dark in the middle of it all,” goat-men, a giant monster with a squid for a head, and crab-lobster-scorpion monsters, as well as being passed by a different version of Teddy Garnett, “a real pretty black girl,” “some young guy dressed up like a mobster,” and an old farmer Levi believes to have been Nelson LeHorn. Levi defeats Meeble’s agents by using the Labyrinth to send them to Yuggoth, domain of Behemoth of the Thirteen; while there, he glimpses the shining trapezoid. The Thirteen are the main villains of Brian Keene’s Labyrinth Mythos, pre-Universal beings that travel from reality to reality destroying Earths. The Labyrinth is an otherdimensional realm that connects all of Keene’s various realities. Tyler Henry was a minor character in Keene’s novel Ghost Walk. Don Bloom was the protagonist of Keene’s short story “Babylon Falling.” Black Lodge is a super-secret occult organization that appears throughout Keene’s works, and across his multiverse. While there is no overt connection in this story, Keene’s notes on his short story “Halves” claim the leprechaun “Mr. Chickbaum” from that story is connected to this “Mrs. Chickbaum.” The siqqusim are the main villains of Keene’s Rising series and the novel Clickers vs. Zombies, all of which take place in an AU. The Earl Harper and Teddy Garnett mentioned here are this world’s versions of those characters, which originally appeared in Keene’s book Earthworm Gods; the version of Teddy seen in the Labyrinth is probably from that world. The zombies could be from any of Keene’s zombie realities. The “something dark” is Nodens of the Thirteen, from Keene’s novels Ghost Walk and Darkness at the Edge of Town. The goat-men are a reference to Keene’s novel Dark Hollow. The squid-monster is Keene’s Leviathan, of the Thirteen. The crab-lobster-scorpion monsters are Clickers, from the worlds of Keene and J. F. Gonzalez’ trilogy of novels and Clickers vs. Zombies. The black girl is Frankie, from The Rising and City of the Dead, and the mobster is Tony Genova, from various Keene works; there’s no way to know yet which of Keene’s worlds they hail from. Nelson LeHorn is from Keene’s novel Dark Hollow, which does take place in the CU. Across all levels of the Labyrinth, Frankie, Teddy Garnett, Tony Genova, and Nelson LeHorn are of the Seven, a group of people with the power to destroy the Thirteen. According to Keene, the Exit, the serial killer from his stories “This is Not an Exit” and “I Am an Exit,” is also one of the Seven, and was originally supposed to appear in this tale, until Keene felt he was stealing the show. Cthulhu cultists, Nyarlathotep, Yuggoth, and the Necronomicon are all from the Cthulhu Mythos of H. P. Lovecraft. The shining trapezoid is almost certainly connected to the shining trapezohedron from Lovecraft’s “The Haunter of the Dark.”