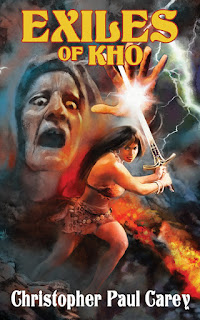 The priestess Lupoeth leads a band of her fellow Khokarsan exiles on a journey which results in the fulfillment of a prophecy she will found a great city. The god Sahhindar accompanies them, and says the city founded by Lupoeth and her companions will be very important to him. The foreword states the bulk of the story is derived from the recently discovered notebooks of Sir Beowulf William Clayton, the Oxford linguist who provided a partial translation of Phileas Fogg’s secret diary. The story has been reconstructed from Clayton’s translation of a tablet enigmatically designated “Holly 27-A.” Sahhindar refers to the star-shaped being from which the roots of the Tree of Kho emanate. Sahhindar and other members of Lupoeth’s group, including the priest Methquth, are captured by the K’goroshanaka tribe. Sahhindar later tells Lupoeth ingesting the nethkarna, the seed of the Tree, caused Methquth to experience visions of the future of Khokarsa. Exiles of Kho effectively serves as a prequel to Philip José Farmer’s Ancient Opar series, detailing how Lupoeth arrives at the site where she will build the city of Opar, from Edgar Rice Burroughs' novels. Sahhindar is the immortal, time-traveling John Gribardsun, as readers of Farmer’s Time’s Last Gift will recognize. Sir Beowulf William Clayton, a distant cousin of Gribardsun, is from Farmer’s The Other Log of Phileas Fogg. Holly is a reference to Ludwig Horace Holly from H. Rider Haggard’s novel She and its sequels. In She, Ayesha states her oracular powers only encompass events in Africa; her ability is derived from the same source as Methquth’s. According to Farmer, Ayesha’s native city, Kôr, was founded by Kohr, the son of Hadon of Opar. The star-shaped being is from Farmer’s translation and adaptation of J.-H. Rosny aîné’s Ironcastle. The K’goroshanakas are the ancestors of the Goura-Zannkas from Ironcastle.