Crossover Cover: Flashman and the Mountain of Light 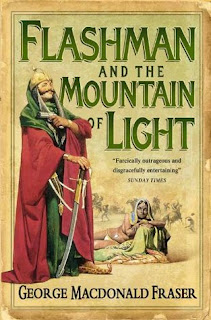 Harry Flashman tells his great-niece Selina the story of a man who lost a rifle in Paris and tripped over it in West Africa twenty years later. The man who lost the rifle is Captain Battreau from P. C. Wren’s story “No. 187017,” included in the collection Flawed Blades. “No. 187017” and Wren’s other books and stories involving the French Foreign Legion are interconnected, including Beau Geste, which Philip José Farmer referenced in Doc Savage: His Apocalyptic Life. The main events of Fraser’s novel take place in 1845–1846, but the framing sequences, which refer to Flashman telling Battreau’s story to Selina, were written by Flashman after 1894 and before 1902.