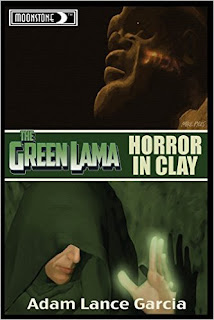 The Green Lama battles a murderous golem created by a Rabbi who initially unleashed the creature on the German consulate in New York. The Rabbi has learned of the Holocaust the Nazis will soon enact against his people from hieroglyphics in an ancient temple in Jerusalem. The temple had images on the walls of the Ark of the Covenant, the Staff of Ra, and crystal skulls. Also in the temple was a statue of a horrible ancient god named Cthulhu. The Green Lama appeared in stories by “Richard Foster” (Kendell Foster Crossen) in the pulp magazine Double Detective. The Ark of the Covenant, Staff of Ra, and crystal skull references are meant to evoke the Indiana Jones films; indeed, an earlier version of this novella that appeared in the anthology The Green Lama Volume One contains a reference to “Professor Jones, Jr. at Marshall College.” Cthulhu needs no explanation at this point. The Lama went on to battle Cthulhu in Garcia's The Green Lama: Unbound.