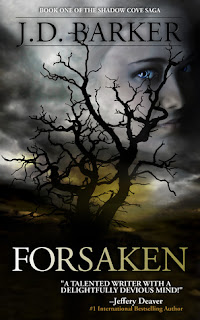 The first novel in J. D. Barker’s Shadow Cove Trilogy. Writer Thad McAlister and his family are menaced by a witch cult from one of Thad’s books, which turns out to be real. Thad’s wife Rachael bought the journal in which Thad wrote the novel at Needful Things, a store in Castle Rock, Maine, owned by Leland Gaunt. The connection to Stephen King’s novel Needful Things brings this series into the CU. Although the epilogue which shows Rachael buying the book from Gaunt is stated to have taken place ten years earlier, Gaunt was only in Castle Rock in 1991, twenty-two years before the novel’s main events. At one point, Rachael reads an old e-mail dated Thursday, December 3, 2014. December 3, 2014 was a Wednesday, and also after this book’s publication date, and therefore the date given for the e-mail must be considered misinformation.